What is minimally invasive and laparoscopic surgery?

Minimally invasive surgery refers to the types of surgery that involve very small or no surgical incisions compared to open procedures which require much bigger skin incisions. As the name suggests they aim to perform the type of surgery required with the minimal amount of injury to the body tissues resulting in a number of benefits for the patient compared to traditional open surgery. 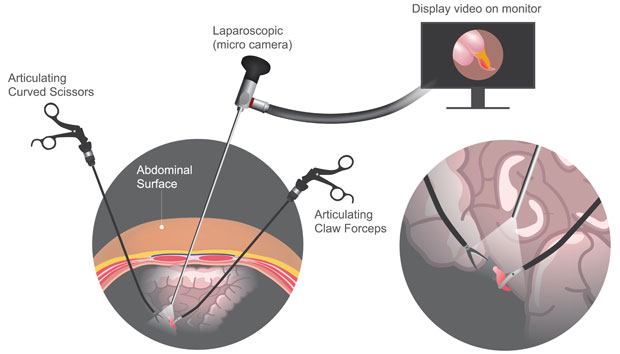 Laparoscopic procedures are performed under a general anaesthetic (while you are unconscious).  In the abdomen, the operations take place through small incisions, 0.5-1cm typical size, through which gas is inflated in order to create space and make internal organs easy to see. A long thin tube with a tiny camera at the tip (laparoscope) is then inserted into the abdomen which provides magnified views from different angles on a screen allowing the surgeon to perform more detailed surgery compared to open surgery. Further long specialised laparoscopic instruments are also inserted under guidance though the small incisions into the abdomen and are used to perform the relevant procedure.

Other types of minimally invasive operations include procedures such as the Transanal minimally invasive surgery (TAMIS) for rectal lesions, Doppler guided haemorrhoidal artery ligation for haemorrhoids, endolaparoscopic polyp resections and endoscopic component separation for complex hernia repairs, all of which are offered by Dr Markides.

What are the benefits of laparoscopic and minimally invasive surgery?

The generic benefits of a laparoscopic procedure compared to an open procedure are:

Is laparoscopic and minimally invasive surgery for everyone?

Anyone can undergo a laparoscopic or minimally invasive procedure and certain groups of patients that would not be fit enough or are considered high risk to undergo traditional open surgery may actually be able to undergo this type of surgery. This is especially true for certain groups of patients such as the elderly and overweight or obese patients. On certain occasions though because of previous surgery in the abdomen or depending on the urgency of surgery open surgery may be performed.

Is it more expensive compared to open surgery?

The cost of the equipment tends to be higher in laparoscopic and minimally invasive surgery because of its specialised nature, this type of procedures require a significant degree of surgical expertise to be performed and sometimes they may take slightly longer to perform compared to open surgery. Due to the beneficial effects of these procedures though patients spent less time in hospital, can return to work earlier, have a reduced risk of having any complications with the relevant additional health implications and costs of treatment with time lost away from work. Overall therefore laparoscopic and minimally invasive procedures are at least as cost effective as open procedures and provide an improved quality of care.