There are different types of surgery than can be performed for the removal of a diseased part of the bowel.

The oncological principle of removing bowel cancer involves the removal of the diseased bowel or rectum along its embryonic fatty envelope with its relevant blood supply and lymph nodes as central to the body as possible with a normal margin of tissue removed on either side. This surgical technique potentially reduces the risk of recurrence but also provides significant information in relation to the prognosis from bowel cancer and the potential benefit of additional treatments such as chemotherapy.
Most of the procedures on the large bowel can be performed laparoscopically (keyhole surgery).  This is a minimally invasive procedure requiring a general anaesthetic in combination with regional anaesthesia. It involves inflating the inside of the abdomen with gas to make space and see the internal organs better and inserting a tiny camera (laparoscope) to see inside the abdomen. Specialised surgical instruments are then used through small incisions, typically 0.5-1cm small, to resect the bowel, and one slightly larger incision up to approximately 5cm is made through which the remaining bowel is joined together and the resected bowel is removed. Prior to your surgery it will be discussed with you whether this is possible.

The benefits of a laparoscopic procedure compared to an open procedure are:

This involves removal of the first part of the large bowel on the right side of the abdomen or the last part of the small bowel and joining together of the remaining bowel with sutures or staples. 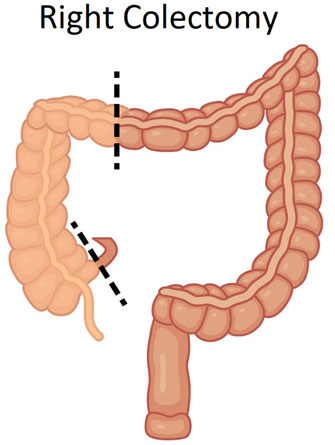 This operation involves the removal of the left part of the bowel and joining the remaining bowel back together. On some occasions a stoma may be formed after removing part of the bowel. The likelihood of this will be discussed with you prior to surgery. Factors such as poor health or undergoing an emergency procedure for perforated bowel are factors that can influence this decision. An enema on the day of the procedure is usually required. 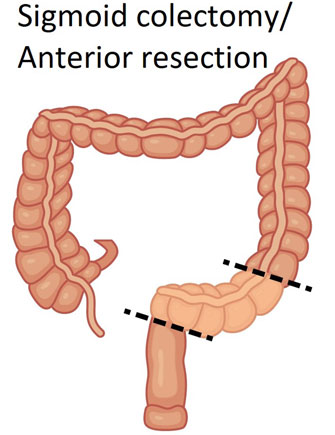 This procedure is usually performed in patients with colitis and involves the removal of the entire large bowel apart from the end-part, the rectum. It is very common for an end stoma (ileostomy) to be formed with this procedure if undertaken for colitis (inflammatory bowel disease).

In this operation the sigmoid colon and part of the affected rectum with a healthy cuff at the end is removed. The remaining healthy colon and rectum is usually then joined together. The closer this joint is to the anus the risk of the joint leaking and contaminating the tummy increases. In order to minimize the effect of this complication if it happens, a temporary stoma may be formed upstream to rest the bowel and allow the joint to heal. The stoma can be joined back together at some time after the initial operation with a smaller operation in order to restore bowel continuity. The likelihood of this will be discussed with you prior to surgery. If a stoma is likely bowel cleansing will be required prior to the operation in order to keep the bowel around the joint clean. A small drain may also be left in the abdominal cavity to prevent the build up of fluid which is removed after a few days.

In some cases where the risk of a joint complication is too high (mainly in the emergency setting) then the end of the bowel is used to form a stoma (Hartmann’s procedure). Once you have recovered from the emergency procedure then a further planned operation may take place to join the bowel back together (reversal of Hartmann’s).

This operation is performed when the lowest part of the rectum and/or the anus needs to be removed due to more extensive cancer in the lower part of the rectum or back passage. It may be able to be performed both using keyhole or open surgery. It involves a permanent stoma and closure of the skin around the back passage area. In certain occasions where the cancer is very low and locally advanced a procedure called extralevator abdominopelvic excision (ELAPE) may be performed. This involves removal of more tissue around the back passage and cancer in a cylindrical fashion leaving a bigger defect behind. In order to close the defect sometimes a prosthetic mesh may be inserted or a part of the buttock skin may be used. 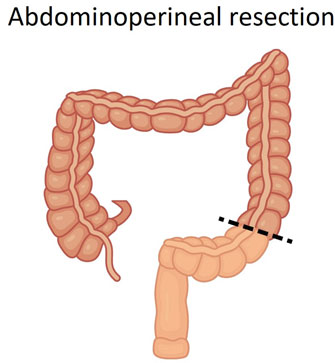 As the name suggests this procedures involves the removal of the entire large bowel and rectum. Depending on patient preference and the condition for which it is performed a permanent stoma with closure of the back passage can be undertaken or the small bowel can be used to form a pouch to act as a reservoir in place of the rectum (ileoanal pouch formation). 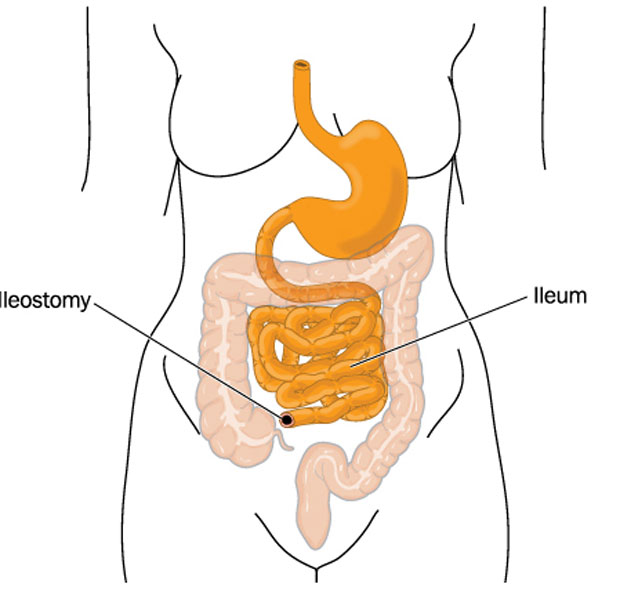 Bowel surgery is major surgery. After the procedure you will wake up in a hospital room most likely in a higher level care bed. The enhanced recovery programme (ERP) is usually followed. You will need to spend a few nights in hospital. Open surgery requires a longer length of stay in hospital. You are typically expected to go home once you are eating and drinking, are able to manage the pain and walk unaided. It normally takes a few weeks to fully recover from bowel surgery and return back to work but it varies from person to person and will depends on your general health and the nature of your work. You should avoid any heavy object lifting or strenuous exercise for at least 6 weeks to reduce the risk of a hernia developing.

Once the removed specimen, with the lymph nodes in the case of cancer, has been tested under a microscope your doctor will see you in clinic and discuss further management of your condition.

Risks of the operations

The likelihood of some of the risks involved in bowel surgery depends on the type of the surgery performed, the disease involved and the health of the individual. Laparoscopic bowel surgery performed by an experienced laparoscopic surgeon has a similar if not an improved rate of complications compared to an open procedure. In terms of cancer surgery it at least equal in removing the cancer. The risks include complications common to all surgical procedures such as infection, bleeding, blood clots, heart problems, pneumonia, urinary retention, development of a hernia, damage to organs inside the abdomen and anaesthetic risks.
Complications specific to this operation include the risk of the bowel going into strike for a few days (ileus) and rare but significant risks such as leakage from the bowel joint, collection of fluid/pus inside the abdomen, damage to other organs inside the abdomen and a risk to your life. In operations involving the lower parts of the rectum there is a risk of bladder and/or erection problems. Some patients may experience some change in their stool consistency following removal of part of their bowel which usually improves with time. All of the above risks are less when performed by experienced surgeons and should be balanced against the risks of not undergoing surgery and the consequences of that. All the relevant information will be discussed with you at an individual basis prior to your surgery.