This procedure may be undertaken on its own but most times it is performed in combination with a wide local excision or a mastectomy under a general anaesthetic. Lymph nodes are small oval shape tissues normally located in areas draining fluid back to the main body. Their function is to capture any bacteria or abnormal tissue and prevent them from reaching the main body. Cancer cells released by a tumour therefore drain through its nearest lymph nodes. Once captured the cancer cells can grow in the lymph node indicating that the cancer has gained the ability to spread (metastasise) to the rest of the body. In the case of breast cancer the lymph glands most commonly affected are the ones in the armpit (axilla).
The sentinel lymph nodes are the first lymph nodes that the cancer will reach once it has spread. In sentinel node biopsy a radioactive injection is placed around the nipple area hours before the procedure while a blue dye is also injected around the same area during the procedure. The radioisotope and dye drain to the axillary nodes and are used to detect the sentinel node (s) which are then removed after a small surgical cut is made. The wound is then closed with dissolvable stitches and the lymph nodes are later examined in the laboratory to check if any cancer cells have spread. If any of the lymph nodes are found to have cancer then further surgery may be required to remove all of the lymph glands from the axilla.

After the procedure you will wake up in a hospital room. If this is the only procedure performed you can usually go home on the same or next day. You are typically expected to go home once you are eating and drinking and are able to manage the pain. It normally takes about two weeks to fully recover from this procedure and return back to work but it varies from person to person and depends on their general health and the nature of their work. Once at home it is important to get adequate rest and perform shoulder exercises to reduce the risk of getting a stiff shoulder. For the first four weeks you should avoid any heavy lifting or repetitive movements (ironing, vacuuming), avoid swimming or playing sport, avoid driving until you are confident. 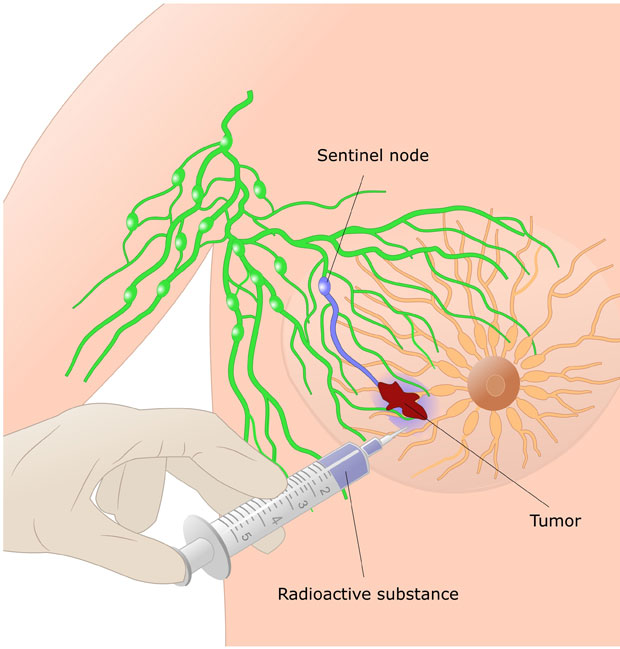 Sentinel node biopsy is a very safe procedure. The benefit of this procedure is that because only a few lymph nodes are removed the risk of swelling of the arm (lymphoedema) is significantly reduced compared to axillary node clearance. Specific risks to this procedure include a small risk of wound infection and the need for further surgery.